Hilton Smythe Finance, a finance broker for small businesses in the UK, has raised concerns that the speed and efficiency of processing the coronavirus business interruption loans (CBIL) could lead the country into the next Great Depression.

Research conducted by the firm has found that, at present, just one in five applicants have been accepted for the CBIL, with fewer still actually receiving the funding. Recent statistics released by the national association of commercial finance brokers (NACFB) also suggested that just 983 loans had been approved to date from more than 130,000 finance enquiries.

This comes after a recent Experian report which stated that approximately half of Britain’s small businesses would run out of funds after two months without emergency funds from the government and a quarter would survive for less than two weeks if their income dried up altogether.

Gareth Smyth, CEO of Hilton Smythe Group, which operates Hilton Smythe Finance, said: “It has been more than a month since the chancellor announced these new measures and, as a finance broker inundated with enquiries for help, we have yet to see many decisions from banks, let alone any drawdown of funds.

“Banking is fundamentally a risk-based business and the government has asked banks to assess the CBIL loans on their usual lending criteria with a self-declaration from the customer, essentially confirming that coronavirus has adversely affected its business. This seems counter-intuitive and may lead to viable businesses, like the ones we support, being rejected for reasons beyond their control.

“While it is clear that the government is, on the face of it, standing behind businesses, the delivery method is poor, sluggish and somewhat questionable. Businesses will be paying out payroll for March and probably April and May before getting any credits from the furlough scheme and seemingly cannot obtain advances from CBIL loans quickly.

“I have to question whether the banks are the right delivery method and feel it would be better for the government to use their data from the PAYE and VAT systems to assess a loan provided directly to businesses based on its contributions to the system.

“The government is starting some bold and innovative measures to protect businesses, jobs and the economy but, in the absence of speedy delivery of funding, all of these schemes will be in vain, and we will be heading for another Great Depression. This issue must be treated seriously and resolved now.” 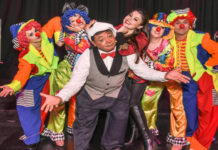 More Swanway Group Support for Not For Profit Circus Starr

Land deal in Bolton for Bellway

Melissa and Mikey make the move to Barton Quarter