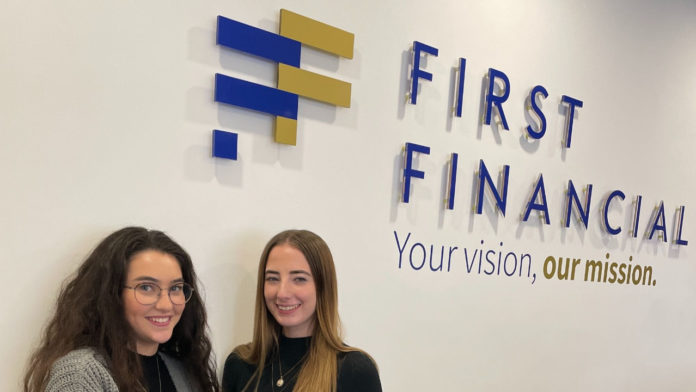 Eloise joins the team with a background in the Retail and Hospitality sectors, having now decided to transition into the financial industry and expand her skillset further.

Having completed A-levels in Philosophy and Ethics, Sociology and Media, Zoe applied for the role in order to pursue a career in financial services, after gaining previous work experience as a website content management specialist.

Their arrival at the firm follows the recent promotion of Tom Perman who joined as the company’s first apprentice during the First Financial Apprenticeship Scheme’s inaugural year in August 2019.

Throughout his training, Tom successfully completed his CeMAP 1 qualification, as well as securing the prestigious title of Core Values Champion in 2020.

With the support of the First Financial team he has since completed his CeMAP 2 and 3 qualifications and taken on the title of Client Relationship Manager, and he is now working towards becoming a financial adviser within the business.

Eloise’s and Zoe’s appointment and Tom’s promotion come during a milestone year for First Financial, which specialises in securing mortgages and providing protection advice to a wide range of clients, including non-traditional borrowers such as media and sports professionals, the self-employed and business owners, and which is celebrating its 25th anniversary.

Taking on its first employee in 1998, the London based company has since grown exponentially – now boasting a team of 21 which consists of four directors, seven experienced advisers, an operations and a compliance manager, and a number of business support and administrative staff.

“Our goal is to find ambitious, driven individuals with limited or no experience but who demonstrate a real passion for the work that we do, and to provide them with the support, guidance and training that they need to become the best that they can be within our industry.

“We are delighted to welcome Eloise and Zoe to the team and looking forward to supporting her over the coming months as she works towards her ambition of pursuing a career in financial services.”

Having represented more than 40,000 clients over the years, the First Financial team holds itself accountable to four core values – including delivering quality, trustworthy advice, while demonstrating a passion for all that they do, and respect for colleagues and clients alike.

Gavin Pearse added: “This is a relatively new scheme, Eloise and Zoe are only our second appointments in the role, but given how well Tom has done in completing his qualifications and embracing our core values we’re confident that it is very much a route of recruitment we wish to continue to grow.”

Speaking of her new role, Zoe said: “I am very excited to be joining the First Financial team, to be learning more about the role of Client Relationship Manager, and to progressing my qualifications.

“It is a huge honour to have been chosen to take part in the apprenticeship scheme and I am grateful to have the opportunity to progress a career within the financial services arena.”

Eloise commented: “This is a fantastic opportunity to be joining the team at First Financial; the apprenticeship scheme has enabled me to pursue a career in the finance sector, utilising my background experience to further develop my skillset.”

Commenting on his promotion, Tom Perman said: “It’s a great feeling to have completed the apprenticeship scheme and to be working towards becoming an official First Financial adviser.

“The training and support I received was fantastic, and I feel like I not only achieved and learnt a lot, I also feel that I have really grown in confidence too.

“I’m delighted to have been promoted to Client Relationship Manager, and I now hope to be able to support Zoe as she looks to complete her qualifications in the coming months.”

A Spotlight on The Park: Europe’s Largest Wine Packaging Company

24 September 2021
JOIN THE COMPANIES THAT SHARE THEIR NEWS WITH US...
...and many more leading local, national and international businesses.