Winners Strength & Wellbeing Studios, located on Stockport Road in Cheadle, is expanding significantly, both in terms of staff and members, after a successful first five months fully operational.

With 160 female only members now signed up, Winners Strength & Wellbeing Studios is fast becoming a multicultural hub with women of all nationalities, training side by side in a safe and non-judgemental environment.

The five new recruits are all female too, enhancing Chloe’s unique offer, with Suzanne Foster and Amy Windsor employed as Personal Trainers, Caroline Barnet as a Fitness Instructor, plus Naomi Richardson and Sophia Maddon as Yoga Instructors.

Suzanne (Cheadle Hulme), a full-time mum of two, was originally a member of the studios and decided to retrain as a PT.  Amy (Cheadle Hulme) is also a full-time mum to three boys and retrained as a PT a couple of years ago.  Caroline (Edgley) works part time at Winners Strength & Wellbeing Studios as she works full time as a Rehabilitation Case Manager for HCML, Sophie (Gatley) is a Nanny and recently trained to be a Yoga Instructor, so this is her first time teaching a class whilst Naomi (Macclesfield) is a highly experienced Yoga teacher running classes at various locations for all ages and abilities.

Chloe says: “Over the last five months we have grown, both in terms of members and classes provided, but now the team too.  Suzanne, Amy, Caroline, Sophia and Naomi all offer the members valuable expertise and with this new team supporting me, we can continue to expand.  What I love about the new recruits is that two of them have changed their careers later on in life, in their 30s and 40s, which is exactly what I did two years ago aged 36.  It’s so important for women to do something they are passionate about and its never to late to choose a different path.

“Since launching, we have witnessed just how in demand the women-only studio is.  It is viewed as a safe space to train and work out, and as such, we have a large number of Muslim women as members who feel at ease and can take off their head scarves.  We are also attracting lots of women in their 40s who are struggling with menopause.  It really is a multicultural studio where women of all ages and abilities come together in comfort.

“The success of the classes is evident, but I want to do more.  I will introduce regular wellbeing talks in 2022 and as part of the company’s development, I hope to link up with local mental health services as well as the NHS so that Winners Strength & Wellbeing Studios becomes a place of referral for those prescribed fitness as part of their mental health rehabilitation.”

In November, Chloe will introduce WINNERS BABY; a six-week course which will include baby yoga and massage, post-natal classes and yummy mummy yoga.

She concludes: “It really is an exciting time for Winners Strength & Wellbeing Studios and for me personally, to be working with a talented all-female team is so inspiring.”

CEO of UK Dog Services start up Bark & Birch expands the company into the USA and Brazil and turns over $8 million dollars... 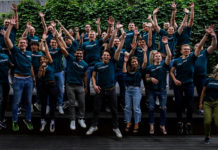