Located within the Lake District National Park and UNESCO World Heritage Site, the £20m museum has been designed by award-winning architects Carmody Groarke and principally funded by The National Lottery Heritage Fund.

The new museum tells the story of 200-years of boats, boating and boat building in the Lake District through its internationally significant collection that reflect themes of technical, social and business development in one of England’s most picturesque settings.

Windermere Jetty is one of the first contemporary buildings to be constructed on the shores of Windermere in over 50 years. A cluster of seven buildings, the new museum is clad in copper with sculptural silhouettes that frame stunning views of England’s largest lake. A series of new jetties on the lake allow visitors to sail on Osprey (1902), one of the museum’s fully-restored Edwardian steam launches and enables the regular lake cruise boats to dock and bring visitors to the museum.

With spectacular panoramic views onto the lake, the new lakeside café offers visitors traditional Lakeland recipes with a contemporary twist, showcasing the incredible local ingredients that Cumbria has to offer.

Owned by Lakeland Arts, the collection of over 40 vessels is the only one of its kind in the world. For the first time over half of the collection, which ranges from Victorian steam launches to record-breaking speedboats from the 1980s, has gone on display. Vessels in the collection include SL Dolly, thought to be the oldest mechanically powered boat in the world, Beatrix Potter’s tarn boat which she used to sketch in, and the 50-foot luxuriously designed Victorian steam launch Branksome (1896).

Rhian Harris, Chief Executive of Lakeland Arts said: “Our Design Team have created an extraordinary museum which connects visitors with the collection, to the lake and with the wider Lake District landscape telling the incredible stories of those to whom Windermere has been so important.”

The visitor journey of the museum which has been crafted by London- based exhibition designers Real Studios, aims to accommodate for both boat enthusiasts and casual tourists alike. The museum opens with five themed displays designed by Real Studios: Just Visiting, Life of Luxury, War & Innovation, Spirit of Adventure and Speed. Each tell unique stories of the people whose lives are linked to the collection, such as steel magnate Henry Schneider who used his yacht TSSY Esperance (1869), to commute to work. These stories tell visitors about the craft and history of boat building on Windermere and the fascinating and eventful personal stories behind the collection.

The museum also features a unique open access conservation workshop where visitors will see the team of skilled conservation boat builders conserve and restore vessels that would otherwise be lost to history. The team use traditional boat building, engineering and boat finishing skills and extend the skills and opportunities through training, apprentice and volunteer programmes that train the next generation. The museum will showcase the quality of their work as visitors will see live conservation and the finished boats on display and on the lake. 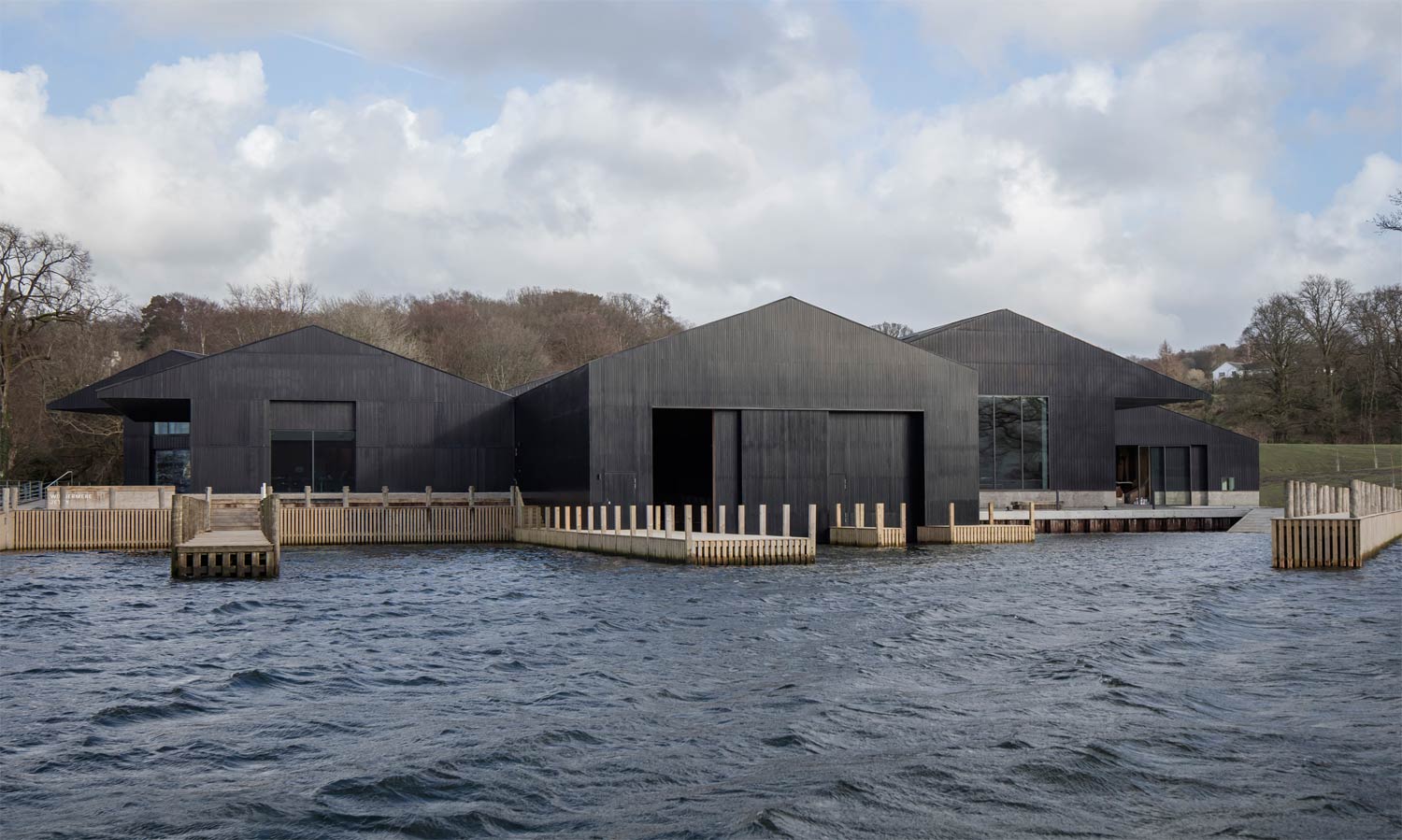 Windermere Jetty is on the site of the former Windermere Steamboat Museum, which was founded in 1977 by George Pattinson, a steam enthusiast who amassed the unique collection of boats which are all associated with Windermere. Prior to that the site was used since the 1920s as a sand and gravel works. The museum has been designed by architect’s Carmody Groarke as a cluster of several buildings within the park landscape. A Boathouse sits at the heart of the composition where boats can be experienced in their natural context – on the water.

The sculptural forms of the buildings make reference to vernacular Lake District buildings in their characteristic overhanging roof canopies, which extend the museum’s environment from inside to outside. All walls and roofs of the museum are covered with oxidised copper to consolidate the whole architectural ensemble. It is intended that the copper will gradually weather over time and blend the appearance of the museum into the natural environment of the landscape setting. Emphasis is placed on making a strong connection between people, boats and water, as well as providing a re-interpretation of the site’s industrial and picturesque heritage.

The museum features a unique open access conservation workshop where visitors will see the team of skilled conservation boat builders conserve and restore vessels that would otherwise be lost to history. The team use traditional boat building, engineering and boat finishing skills and extend the skills and opportunities through training, apprentice and volunteer programmes that train the next generation. The museum will showcase the quality of their work as visitors will see live conservation and the finished boats on display and on the lake.

ANDY GROARKE, DIRECTOR OF CARMODY GROARKE COMMENTED: ‘Working with Lakeland Arts and museum stakeholders, we created a museum whose design would make a connection between people, boats and water, and which would also reinterpret the site’s industrial and picturesque heritage.’

NATHAN LEE, HEAD OF HLF NORTH WEST, SAID: ‘This is excellent news for the Lake District and Cumbria – already a UNESCO World Heritage Site. We are delighted to see this new flagship museum on the shores of Windermere – one of the UK’s most famous lakes – open its doors to the public for the first time thanks to National Lottery players.’

The total project costs for the Lake District’s new Windermere Jetty Museum of Boats, Steam and Stories is £20m. The National Lottery Heritage Fund is the major funder for the museum, contributing over £13 m to the project, raised by National Lottery players.

The project is also supported by the DCMS Northern Cultural Regeneration Fund, Regional Growth Fund, the Rural Development Programme for England and other trusts and foundations.

13 October 2021
JOIN THE COMPANIES THAT SHARE THEIR NEWS WITH US...
...and many more leading local, national and international businesses.