A graduate from Nottingham Trent University has celebrated early entrepreneurial success, after generating a multi-million-pound turnover in the first 12 months of business.

Established in July 2020 by Jack Tierney [23] and his best friend, Nat Biggs [24], Double Boxed Ltd is fast becoming the UK’s leading provider of exclusive trainers and streetwear to consumers worldwide.

Having sold in excess of 10,000 orders over the last 12 months, the entrepreneurial duo developed the concept for Double Boxed when Jack was studying Business Management and Entrepreneurship at Nottingham Trent University and Nat was working in a sales executive role.

In buying and selling new and exclusive Yeezy and Air Jordan trainers via Facebook groups, both Jack and Nat soon believed they could transform their passion into a business. Due to lockdown restrictions, they set up shop from their own parent’s garages in Burton-on-Trent and officially launched the Double Boxed eCommerce store in July 2020.

During the initial few months, sales were consistent, but it wasn’t until Jack and Nat developed seasonal campaigns for Black Friday and Christmas that revenue really boomed. Successfully generating in excess of £800,000 in sales during this two-month period, they were forced to upscale their operation and quickly moved into a new warehouse that could accommodate the stock levels required to meet new consumer demand.

In July 2021, Jack and Nat celebrated their first year in business, having exceeded an impressive £2.4 Million in revenue for the Double Boxed brand.

Jack explained: “When we launched Double Boxed last year, we thought it would be amazing to generate over £100,000 in sales and genuinely didn’t dream of the level of success we have already experienced during our first year in business.

We have not only worked really hard to source in-demand street and footwear, like Yeezys, but have also created a number of creative campaigns that have really struck a chord with our target demographic. Now we have moved into our new warehouse, we are working on expanding our range, whilst recruiting new team members who are united in our vision to become the world’s leading trainer and streetwear provider, selling exclusive products at competitive prices.”

The Restory to exclusively power aftercare for Manolo Blahnik

The Restory launches aftercare for clothing 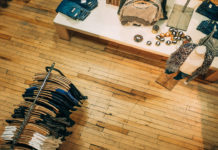 A spotlight on diversity in the fashion industry

Quadient launches its new adaptable and flexible mailing solutions in the...

CaixaBank, together with fraud prevention start-up Revelock, is developing an artificial...

20 September 2021
JOIN THE COMPANIES THAT SHARE THEIR NEWS WITH US...
...and many more leading local, national and international businesses.