Fighting knights, expert archers and wise-cracking jesters will be among the entertainment to delight audiences when annual Shropshire spectacle Ludlow Medieval Christmas Fayre returns as a live event next month.

Tickets have been selling fast for the Fayre, which resumes as a live show in the grounds of Ludlow Castle on November 27-28, providing its unique mix of entertainment for all the family as part of the run-up to Christmas.

The live programme for 2021, announced this week, will include returning favourite the Tournament of Knights, which sees fearsome warriors compete before the crowds using sword, mace and quarter-staff, culminating in a Saturday evening fight with fire.

Other highlights include a re-enactment of the Battle of Agincourt which gets the whole audience involved as they re-enact Welsh archers demonstrating their prowess against the French during the famous victory.

Confirmation of the programme comes after the first 1500 tickets sold in record time when bookings opened. Tickets for some entry timeslots are already close to selling out.

Having moved to a digital version in 2020 due to Covid-19, the rapid sales for the 23rd Medieval Christmas Fayre to be staged at Ludlow Castle show families and regulars are looking forward to the full return of the immersive Medieval gathering for all ages.

To keep audiences safe, the Fayre will be for pre-booked ticket holders only so with a limited number available, Fayre lovers should make sure they book. Tickets are on sale via the Fayre website.

The team at Dakin Events, the south Shropshire family business behind the Fayre, have been delighted to shape the programme for 2021, mixing old favourites and new entertainment. Mother and daughter team Prue and Abi Dakin have been pleased to see the rush to buy tickets for this year’s live return.

Abi said: “The 2021 Ludlow Medieval Christmas Fayre is set to be back with a bang, with a live programme to entertain audiences of all ages, so it has been tremendous to see so many people booking early to join the spectacle.

“We have exhibitors and entertainers from across the UK joining the celebrations, as well as regular visitors who travel from all over Shropshire, the wider West Midlands and across the UK. We know Fayre goers are joining us from far and wide, with coach companies reporting high levels of interest from people who missed being able to join us last year.”

Prue said: “Given the challenges of the last 18 months for everyone, it means a great deal to see so many people plan to join us for the full return of the Fayre. For many families, the Fayre marks the start of the build-up to Christmas so we cannot wait to see everyone with us for another live event.”

More entertainment will be provided by Midlands actor and musician Lucio Gray, historical costume expert The Medieval Tailor’s Assistant, Shropshire comedy troupe The Shrewsbury Mummers as well as plenty of audience participation with What a Palaver.

There will be more medieval solo performances from the Wise Woman of Worcester, with her assortment of medieval cures, and popular storyteller Yarnsmith of Norwich.

The live medieval music performers include Baggshotte Waytes, who play a range of instruments including trumpets, skirling pipes and hurdy gurdys, music foursome Diablos in Musica and West Country carol singers The Quire, who will lead Fayre goers through a Saturday night audience participation performance. 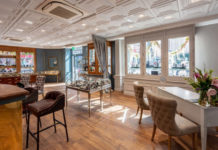 STB Graphic Designers empowers its staff and looks to a bright...

Hymn for the Planet – Climeworks Part of Sustainability Portfolio of...