An entrepreneurial couple from Leicestershire who own a motorhome-for-hire business called Hey Campers, have seen interest soar after being handpicked to appear on a Channel 5 series.

Trudi and Adam Lilley made their debut appearance on Million Pound Motorhomes on Sunday 19 September, following a stint filming with the production company during July and August – their busiest months of the year.

A crew followed Trudi and Adam to document the day-to-day running of Hey Campers from its Leicestershire depot, and also journeyed with them to Southampton as they collected a new motorhome to add to their growing luxury fleet.

The Lilleys featured alongside actor Ricky Tomlinson and chef James Martin on the programme, and are set to appear on the upcoming edition too, airing at 8pm on Sunday 26 September 2021.

It has already reaped benefits for the pair, with traffic to the Hey Campers website receiving more visitors in one night than for the previous month – and hundreds of enquiries flooding in.

Trudi said: “We had over 4,000 website visitors during the evening the show aired, which is fantastic. We only launched the business last year, so to feature on a primetime TV show is brilliant, it will definitely keep us busy!

“It was a really positive experience, albeit a bit exhausting. The crew felt like part of the family during the months they were with us. What was great was that they put themselves in our shoes, taking the time to understand what it means to run a luxury motorhome hire company and sharing some laughs and mishaps along the way.”

In 2020 Trudi and Adam, who have run an accountancy consultancy together for the past seven years, decided to turn their passion for motorhoming into a business.

Their Coalville depot is now home to ten vehicles – Alfie, Charlie, Rosie, Maisie, Tillie, Beni, Lexie, Lillie, Minnie and Poppy – but the duo will soon double their fleet into a million-pound venture, with ten new motorhomes on order.

The programme followed the ups and downs of the Hey Campers team, notably including when a customer returned their motorhome smashed up from a crash – leaving just hours to fix it before a family of holidaymakers arrived to collect it for their booking.

Trudi adds: “The air turned a bit blue at that point! We tried very hard not to bicker while they were filming, and we mostly achieved that – although I can honestly say it was a real test of our relationship. But it also made me realise just how much Adam and I do enjoy working together.”

The Lilleys watched the Million Pound Motorhomes episode with their family and friends Gogglebox-style, and have penned a blog about the filming experience.

Trudi concludes: “We have no real expectations from the show, except we hope it makes viewers realise how much fun and magic there is in having a motorhome holiday.

“We do have big plans for the business though. Our aim is to become the UK’s first luxury staycation provider. We want our customers to have trips that are truly memorable, so for us that means added extras like luxury bed linen, made to order food hampers, 5G enabled WIFI fitted as standard and premium sports and movie channels.

“We hope to add even more to that in future, such as chartered boat trips and money-can’t-buy experiences, so watch this space.” 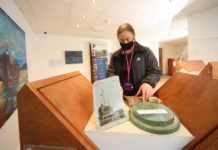 14 October 2021
JOIN THE COMPANIES THAT SHARE THEIR NEWS WITH US...
...and many more leading local, national and international businesses.