Leading green energy pioneer AceOn today welcomed the Prime Minister’s plans for a green industrial revolution – but warned they need to go even further if the UK is to meet its legal Climate Change targets.

The AceOn Group – which has developed a cutting-edge virtual power plant which can power individual homes and whole communities – says solar and battery technology must play a key role in the Government’s plans for developing a sustainable future.

It also called for a massive upgrade in the nation’s energy infrastructure to cope with the move to bring forward a ban on the sale of diesel and petrol cars to 2030, so that the nation could power the new wave of electric cars hitting the roads.

AceOn founder Mark Thompson said the country needed a bold, integrated and innovative approach to renewable energy if it was to meet its legal obligations to be net carbon zero within 30 years.

“There is much in what the Prime Minister says that we welcome, but time is running out and we fear the measures need to go much further and be much more strategically thought-through to be a success.

“The move to ban new petrol and diesel car sales is positive, but if we do nothing about the way we deliver power through the National Grid then it will be impossible to achieve.

“We believe that much greater use of the new technologies we and others are developing around energy storage can take a huge load off the National Grid. Our work to bring old batteries back into use to efficiently store solar power shows just what can be done by backing innovation.

“We are disappointed that more is not made of solar power in the Prime Minister’s plans as this offers huge possibilities for delivering sustainable, low-carbon power on a huge scale for generations to come.

“Our Renewergy Virtual Power Plant, for example, is really exciting new technology which can power individual homes and communities through solar power on a national scale. It reduces electricity bills, cuts emissions, is highly efficient and also provides a revenue feed for developers.

“It is schemes such as these – achievable now and ready to roll out – which will drive the change to a green economy which we must achieve for the sake of our children and their children.

“And the spin-offs in terms of new jobs, new skills and new technologies can help establish this country as a leader in a new, modern, green world.”

As well as the ban on petrol and diesel car sales, Boris Johnson also pledged to quadruple offshore wind power by 2030, boost hydrogen production so that a town can be heated entirely by hydrogen by the end of the decade and invest £525m towards new nuclear power stations.

He said his government would also commit £1bn next year for funds to insulate homes and public buildings, invest £200m in carbon capture initiatives and oversee the planting of 30,000 hectares of trees every year.

Telford-based AceOn has over 30 years’ experience in the design and manufacture of custom-built battery packs and the distribution of industrial and consumer batteries to the worldwide market. The energy division provides a training, service and distribution centre to offer a full turnkey solution for residential and commercial battery energy storage systems.

The group, which employs 23 members of staff, has built a reputation as being specialists in solar and battery technology, particularly the development of bespoke, custom-built battery packs. 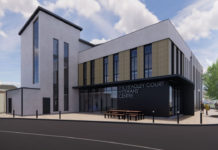